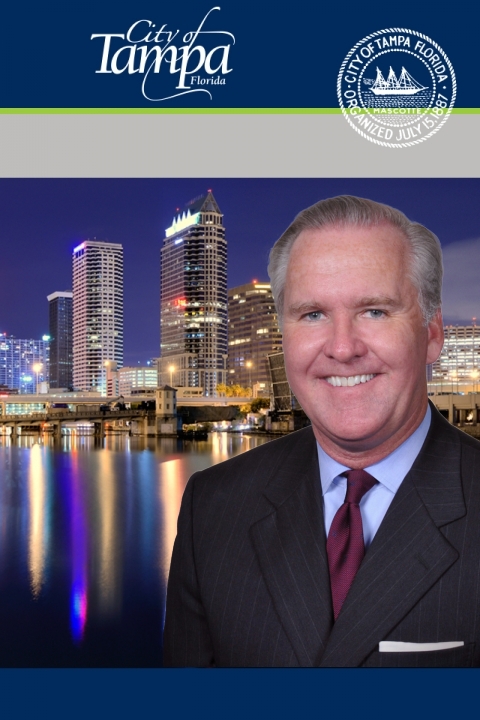 Add Bob To Your Contacts?

Bob Buckhorn was sworn in as the 56th mayor of the nation's 55th largest city on April 1, 2011. Buckhorn believes Tampa's strength is in its diversity and he is focused on building an environment that will move Tampa to the next level and create a strong economic climate. As Buckhorn moves forward to assemble a team, his priorities are job creation and economic growth. As Tampa's mayor, Buckhorn serves on several boards and governing authorities including the Hillsborough County Aviation Authority, Tampa Bay Area Regional Transportation Authority, and the Tampa Port Authority. The mayor is represented on the Hillsborough Area Regional Transit Authority, the Metropolitan Planning Organization, Tampa Bay Water, and the Tampa-Hillsborough Expressway Authority. He also appoints citizens to serve on a number of other boards, committees and authorities charged with regulating and overseeing various city operations. Buckhorn is committed to continuously looking for ways to reduce costs and create opportunities for economic growth. In June 2011, he formed the Economic Competitiveness Committee to review the City of Tampa’s permitting and regulatory processes and look for ways to improve the system. Their recommendations resulted in upgrades including the creation of Tampa’s Development Services Center, a one-stop permitting shop, and the switch to Accela, an automated permitting system. Buckhorn is committed to ensuring that Tampa is known as a place that is open for business and he will continue to focus on building an environment that will create a strong economic climate. A long-time supporter of the military, Buckhorn was chair of the MacDill Reuse Advisory Committee in 1991 and served as a member of Florida's Defense Transition and Conversion Commission. He helped lead the effort against the closure of MacDill Air Force Base to ensure its 6,000 jobs and $2 billion economic impact remained in Tampa. He co-chaired the Base Closure Committee that coordinated Florida's fight to save its bases, which resulted in no base closures for the state and a net gain in military-related jobs. Previously, Buckhorn was the Director of Governmental Affairs for the Builders Association of Greater Tampa and in 1987 became the Special Assistant to Mayor Freedman. In 1995, Buckhorn was elected Tampa City Council and was the Chairman of the Public Safety Committee, a member of the Municipal Planning Organization, and the Chairman of the Hillsborough River Interlocal Planning Board. In 1999, he was reelected to the Tampa City Council for a second term with 75% of the vote. In 2003, Buckhorn joined the Dewey Square Group, a nationally known public affairs company, and was principal in the Florida office. In March 2007, he opened Buckhorn Partners, a public affairs firm based in Tampa. Buckhorn, 53, graduated from Penn State University in 1980 with a degree in Political Science. He is married to Dr. Catherine Lynch Buckhorn and they have two daughters.

Tampa is an exciting city, rich in history with unlimited possibilities for the future. From our vibrant downtown and diverse neighborhoods to our universities and businesses, Tampa is home to a blend of cultures and traditions that make up the unique fabric of our community.

It's no surprise that Tampa, the nation's 55th largest city, has been selected time and time again as host to major conventions, NFL Super Bowls, and the 2012 Republican National Convention. We are home to some of the country's best destinations and attractions, including Busch Gardens, the Florida Aquarium, and Lowry Park Zoo, making Tampa a top tourist destination.

City Government is working constantly to improve the overall quality of life in our community. We are committed to public safety, strong neighborhoods, and economic growth. These goals are reflected in our daily decisions as well as on our website. With over 5,000 pages of information that include city contacts, online business services, and upcoming events, TampaGov.net has more than 23,000 visitors a day.

The online Customer Service Center is a one-stop shop that allows you to submit a request and track its progress online twenty-four hours a day, seven days a week. Whether you need to make a payment or are interested in relocating your business to Tampa, our website is able to provide the exemplary customer service that we pride ourselves on here in Tampa.

Built on a foundation of rich history and strong spirit, Tampa is a city that continues to move forward and thrive. Whether you are living in Tampa, doing business in Tampa, or visiting, you will soon see why Tampa is full of possibilities and friendly people. You can enjoy a stroll along the Tampa Riverwalk, take in a show at the Straz Performing Arts Center, visit the Tampa Museum of Art, enjoy a day at the Glazer Children's Museum – or better yet catch a Buccaneers, Lightning or Storm game.

I am proud to serve as mayor of one of the greatest cities in America. I want to thank you for visiting Tampagov.net and I hope you enjoy your visit as you explore our amazing city.

SavvyCard is an online business card that makes working with Bob as easy as tapping a button!

Tap the Call, or Email buttons to contact Bob directly.